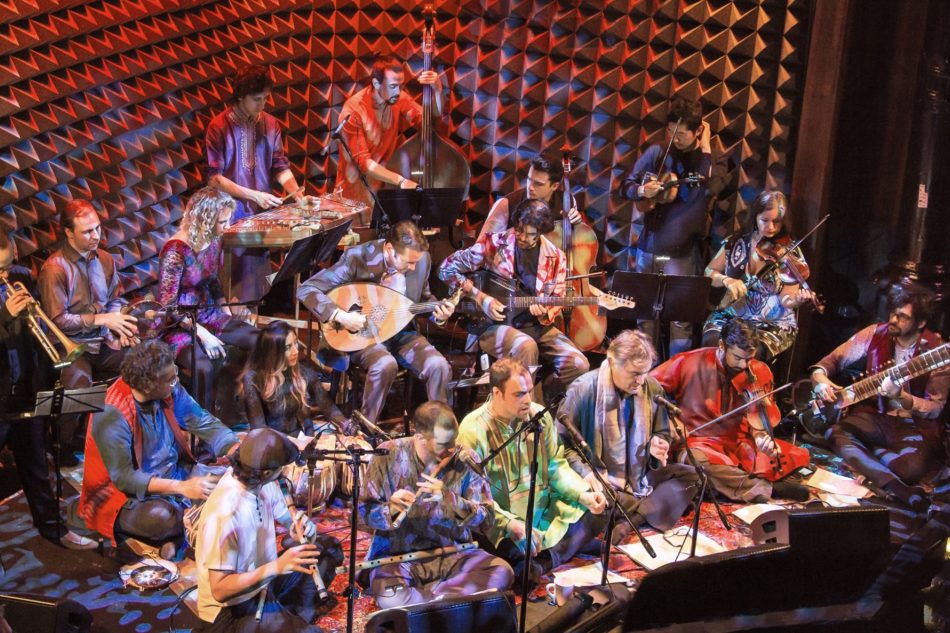 Terry Riley composed the iconic work In C in 1964 and the piece, first performed with a group including Steve Reich and Pauline Oliveros is often credited with creating the genre of minimalism. Riley was influenced by Indian Classical music and later studied deeply initially under the guidance of Pandit Pran Nath. Brooklyn Raga Massive, “Leaders of the Raga Renaissance,” (The New Yorker) are an artist collective that share a love of Indian Classical music, and have made big waves in New York City over the past seven years for “Preserving the past while blurring genres in an inventive spirit” (The New York Times). A raga influenced performance and recording of In C, by Brooklyn Raga Massive was a perfect fit for the adventurous crew and brought the piece, and genre, full circle, back to its Indian Classical roots.

The dreams of the musicians in Brooklyn Raga Massive were exceeded when Terry Riley heard their version and began corresponding with them dreaming up a new piece for the group. In their performances of In C, Terry suggested that they “use the basic In C form but open it up to solos…based on some of the patterns.”  The piece has evolved in the hands of the collective and has grown to touch on a series of ragas, Indian classical modes that evoke particular rasas, or emotional essences. Filled with improvisation and synchronicity no two performances are alike.

This event features two performances at 1pm and 3pm.

Brooklyn Raga Massive has been making waves for their role instigating what the New York Times, New Yorker, and Wall Street Journal have called a “Raga Renaissance.”

Rite of Summer
Rite of Summer produces free outdoor concerts of classical and cutting-edge contemporary music, performed by many of New York City’s best-known soloists and ensembles. These musicians, all of whom perform on some of the world’s most prestigious concert stages, are excited about reaching a younger and more eclectic audience base on Governors Island. The festival’s “concert hall” is Nolan Park– a grassy lawn where listeners are encouraged to sprawl out on blankets or picnic tables and take in the great outdoors. Audiences of all ages are captivated by the series, the setting, the music, and the full Governors Island experience.